Japan and India are expected to advance nuclear cooperation.

Japan and India are expected to advance defense, economic, and even nuclear cooperation. In August 1977, Japanese Prime Minister Takeo Fukuda emphasized on the “three main pillars” of his... 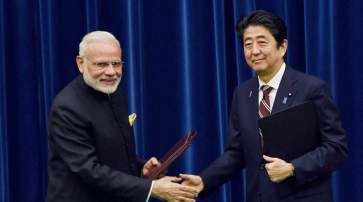 Japan and India are expected to advance defense, economic, and even nuclear cooperation.

In August 1977, Japanese Prime Minister Takeo Fukuda emphasized on the “three main pillars” of his trip to Manila. Those “pillars” went on to become the major principles of Japan’s foreign policy toward Asia, known as the Fukuda Doctrine of “Heart to Heart Relations.” In particular, Fukuda pledged that Japan, while possessing the means and capability, would never walk the path of militarization ever again. This policy guided Japanese foreign policy toward the rest of Asia until very recently. The growing aggressive stance of China in the region and the coming to power of a revisionist prime-minister, Shinzo Abe, has marked a clear shift in Tokyo’s regional security policy.

When Indian Prime Minister Narnedra Modi visits Japan on November 11, on a 48-hour trip for the Third Annual Summit meeting, Tokyo is expected to sign its first major defense deal in the last 50 years, the sale of US-2 Amphibious aircraft to India. Sources also say that the aircraft will bear the name US-2i, which clearly indicates how serious Modi is about promoting the “Make in India” campaign. The US-2 aircraft will enable India to better surveil its Exclusive Economic Zone in the Arabian Sea and Indian Ocean region. This will in turn speed up an Indian Navy response to incidents near the Andaman and Nicobar Islands, major strategic holdings from a geopolitical viewpoint.

Apart from in-depth exchanges on bilateral, regional, and global issues to further deepen the broad-based and action-oriented partnership between India and Japan, Modi’s visit will also reportedly see a civil nuclear deal. Such a deal, if concluded between New Delhi and Tokyo, would definitely antagonize Beijing. China has continuously tried to stop India’s entry into the Nuclear Suppliers Group (NSG) citing as a reason that India is not a signatory to the Nuclear Non-Proliferation Treaty (NPT). New Delhi should understand that China wants to penalize it for growing closer to the United States and engaging with Japan in the pacific region. Beijing also does not want to let down its all-weather ally Pakistan by accepting India’s global role as a responsible nuclear power. By convincing Tokyo to sign the civil nuclear deal, New Delhi has played a major trump card. Reports suggest that the deal between India and Japan would be concluded along the lines of the NPT, and Tokyo would walk out of the deal of India carries out a nuclear test, which it is highly unlikely to do considering its past record.

From an economic viewpoint, also, the civil nuclear deal is highly lucrative for both India and Japan. For India, the burgeoning demand for electricity to feed its mushrooming industry since the liberalization of economy in 1991 has emerged as a major problem. With increasing levels of pollution in Indian cities and the catastrophic rise of pollutants in New Delhi this week, nuclear energy seems to be the only viable solution to ensure a clean and sufficient supply of energy for India. Meanwhile, with Japan trying to phase out nuclear power after the Fukushima disaster in 2011, Tokyo is now looking for new markets in which to sell its nuclear technology.

This is true in other fields as well –with Korea and China giving stiff competition to Japanese consumer goods, Japan is desperately looking for new markets for its products. High-speed rail is one such example, with Japan having agreed to develop a 505 km corridor for India between Mumbai and Ahmedabad. This move came straight after Japan lost a high-speed railway bid to China in Indonesia earlier in 2015. Today, the Chinese economy stands on the massive Japanese investment made during 1970s, and now Japan needs to similarly support India in its development in order to have a strong and reliable partner in Asia.

On the strategic and geopolitical front, with Donald Trump having been elected as the new U.S. president, Japan’s military clout in East Asia is poised to grow stronger amid uncertainty about Trump’s commitment to U.S. allies. If Trump decides to reframe the U.S.-Japan security pact, Tokyo would have to look for new partners to counter the growing Chinese presence in the Asia-Pacific region. It is in both India and Japan’s favor to mutually cooperate and benefit from the idea of a “special strategic and global partnership.”